Sales Tax Up? Yes. No. Depends

It's All How You Look At It

Last year the Missouri Department of Revenue instituted a new sales tax reporting system.  The system is much easier to use and makes it faster to report more detailed information.  However, as with any new system, there are quirks and bugs that need to be worked out.

Which brings me to the January sales tax report.

If you'll recall from the news and social media postings, there was a December "supplemental" distribution of sales and use tax monies.  Some earlier months' receipts were not included during the normal reporting periods in the transition to the new system and the DOR distributed these amounts later in December instead of waiting until January.  The January report (which is money collected in December and distributed in January) includes the Santa's Surprise Distribution and money collected during the rest of the month.  However, the money distributed in January does not include supplemental distribution, and thus the report differs from what actually was deposited in the County's bank account.

To the best of my knowledge, this happened state-wide to every jurisdiction.

The money collected by the DOR in December was $912,439.52, an increase over January 2017.  Since part of that money was already distributed in December, the money deposited by the DOR this month was $723,960.67, over 18% less than last year.  Sales tax is up but it was paid out differently.  Visually, think it this way: 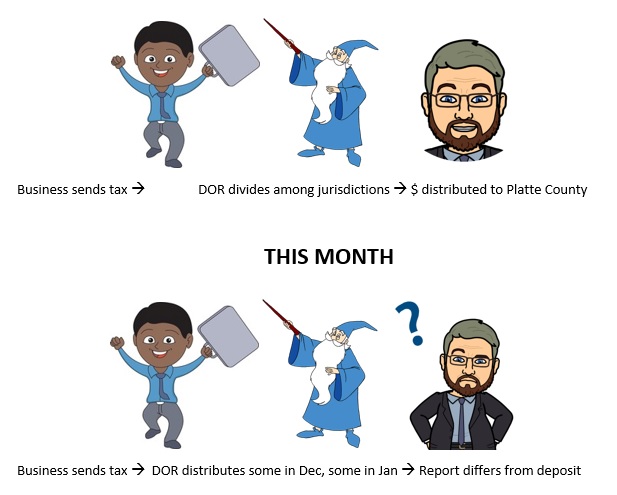 The full report will be available at the end of the month.  Thanks for reading.

Posted by Rob Willard at 9:44 AM No comments:

September sales tax receipts were up 8.6% compared to September 2014, culminating in a  1.5% increase for the year.

You can read the full report at http://www.co.platte.mo.us/county_elected_officials/profile_treasurer.html.

This marks the first time I've made a pancake reference two months in a row: general sales tax and use tax revenue is down, but only a difference of .0007% .

The revenue for the roads and parks tax have climbed at a higher rate, with both tax revenues climbing 12.4% over the same period last year, perhaps highlighting odd reporting quirks from Jefferson City.

The Platte County Treasurer's Office is closely watching the baseball standings.  Not only because any true American is a Kansas City Royals fan, but also because of the noticeable bump we saw in revenues because of the World Series run last year.

Platte County consumers, like the rest of America, have saved a lot of money on gas prices in recent months.  Did Platte Countians take those savings and spend more on turkeys in November for Thanksgiving?  Should pigs be nervously watching gas prices around Easter?  I have no idea, but I do is the sales tax report for January 2015, which reflects November sales, was significantly higher than 2014.

January sales tax revenues were 27.4% higher than the same report for 2014.  You can read the full report at http://www.co.platte.mo.us/county_elected_officials/profile_treasurer.html.

The use tax fell 14.6% compared to 2014 (A brief examination of the use tax is now available at plattemoney.com.)

General sales tax and use tax combined is up 12.6% for the year.

* Delay in release of numbers *

I apologize for getting the sales tax numbers out later than normal.  Between numbers arriving a bit later from Jeff City because of the holidays, along with the entire Willard family getting the flu, you're getting this email at the end of the month rather than the middle.  Let's hope February is a healthier month.

What’s the Use of the Use Tax?

Every month the Treasurer’s Office receives two sets of data from the Missouri Department of Revenue – sales tax receipts and use tax receipts.

Sales tax is pretty straightforward and everybody who has ever gone shopping knows what the sales tax is: a percentage of your total purchase is collected by the merchant and sent to Jefferson City.  In addition to state sales taxes and municipalities and special districts, Platte County merchants collect 1.375% for Platte County General revenue, parks and transportation.

What isn’t as well known is the “use tax” which is defined as a tax that “is imposed on the use, storage or consumption of tangible personal property in Missouri, unless the purchase is subject to sales tax or there is a specific exemption,” according the Department of Revenue website.

For example, a person in Missouri buys a computer online from a business in California.  The California business doesn't charge sales tax on the purchase.  The buyer should pay a “use tax” on the use of the computer in the amount equal to what they would have paid in sales tax and file a return with the State of Missouri because sales tax wasn't collected.

I was asked this week by a business owner if sales tax or use tax should be collected on a transaction.  What if any use tax is paid for a transaction is a case by case decision, and really a legal question.  You should consult with the Missouri Department of Revenue or an attorney if you have a question.  Lots of fun information is on the DOR website http://dor.mo.gov/faq/personal/consumeruse.php.

Over the last ten years in Platte County receipts for use tax have equaled about one fifth of the total sales tax receipts.  However, month to month receipts sometimes vary greatly.  Sales tax receipts for October rose over 7% compared to last year, but the use tax was up over 25%.  The previous month the use was down almost 7% and the sales tax was flat.  Like any economic data, a long range view and a larger set of data will give a more accurate picture than month to month numbers. 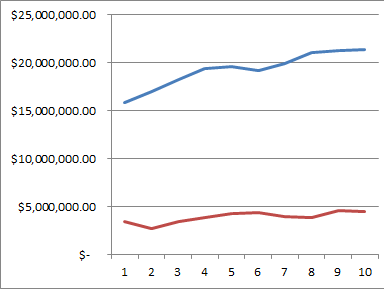 Platte County General sales tax up 1.2%, use down 6.8% compared to September 2013. Combined revenue up 5% for year. Full report later this month.
Posted by Rob Willard at 10:10 AM No comments:

The Platte County Treasurer’s Office distributed $354,682.17 to Platte County schools this week.  Under Missouri law, money collected by the county from proceeds of criminal fines and asset forfeitures are distributed to schools within the county.  Allocation of the money is based on enrollment and is transferred to the district’s school building revolving fund.

“I don’t usually say ‘I’m happy’ when I’m distributing funds, but this is the exception,” Platte County Treasurer Rob Willard said.  “Anything our office can do to help kids makes it all worth it.”

The Treasurer’s Office distributes proceeds from the school fund twice a year.

Posted by Rob Willard at 8:51 AM No comments: